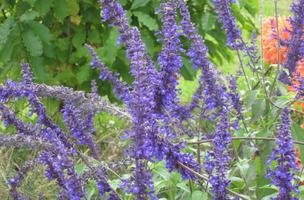 A note on size and proportion

We have recently removed from a mature woody planting a fine specimen of parrotia persica, an Asian tree the Hammelidaceae, the witch-hazel family.  When the tree was planted, some thirty odd years ago, it seemed an appropriate plant for the location, and for quite a few years it was.  Then it became a bit too large, and then very much too large, crowding the other plants, very much out of proportion.  The Parrotia was an excellent example of its kind.  It developed multiple trunks, and in another place would have been spectacular.  As a centerpiece in an open lawn the tree could have grown to its full potential and dominated a landscape.  Sometimes when planting small trees and large shrubs, they grow much too large for the space, and they have to be removed.  The decision to remove it was painful-no one wants to take a chainsaw to thirty years of growing- but it had to be done.

Now that the Parrotia is gone, the remaining plants in the bed look well balanced, but there is a hole in the garden.  The other plants, deciduous hollies, Heptacodium, Fragula carolinianum, Chionanthus, will  grow to fill some of the space, but the bed needs filling.

We will use deciduous azaleas to fill the area.  These will be almost entirely eastern North American native species and hybrids between those species.  Their texture is lighter than that of the older shrubs and small trees, their foliage is small, their size, from three feet to eight or nine feet tall and three feet to six feet wide, will balance nicely with the older plants that will surround them.  They will flower , each in it's season, in succession from April until mid August, with a wide range of color, from whites and soft pinks to bright reds and oranges, some solid colored and some bi-colored.  They are native, so are entirely hardy and at home in this environment.   they require little care.  When they are settled, we will under plant with native spring woodland wildflower, Trillium, Asarum, hepatica, Arisaema, and so on.  In a couple of years no one will miss the Parrotia.

What about Parrotia persica?  My understanding of the tree when I planted it was that was a small tree, and well suited to a mixed woody design.  It is in fact a potentially lawn sized tree, better fitted to dominating a decent sized open space as a single specimen.  We have a space like that and will put one there to mark a terminal point of the garden.